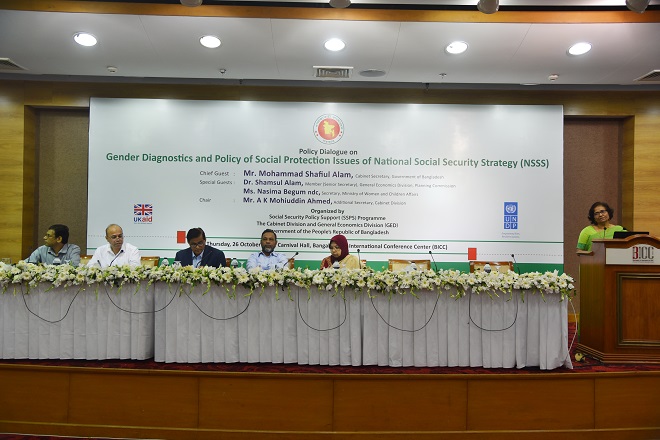 Notable progress has been achieved in poverty reduction in Bangladesh as a result of planned and concerted actions. The country was recognized for its strong performance against majority of the targets of the Millennium Development Goals (MDG) and has achieved the level of lower middle income country (MIC). A World Bank Report (2016) has found that extreme poverty reduced significantly and the reasons include gender parity in education, effective family planning, and economic growth among others. Still 20 million people remain under extreme poverty, calling for effective poverty reduction programmes.

A wide range of social protection (SP) interventions by both government and non-governmental agencies are in effect within the national poverty reduction framework. Social protection is a response to the dynamic understanding of poverty and attending problems of risk and vulnerability (World Bank). Social protection is a large envelop in which many different socio-economic policies and measures can be placed. It encompasses the set of policies and programmes designed to reduce poverty and vulnerability by promoting efficient labour markets, diminishing people’s exposure to risks, and enhancing their capacity to protect themselves against hazards and the interruption/loss of income (ADB, 2012). Social protection provides protection and prevention services from insecurity and vulnerability including safety net, social security, social transfer, social insurance, health care, etc. Social protection can help people meet immediate basic needs in times of crisis in the short-term and also can have longer-term aims for enabling people to move permanently out of poverty (Babajanian et al., 2014) by improving opportunities for inclusive growth, human capital development, equity and social stability. Some social protection programmes intend to be transformative, supporting equity, empowerment and human rights.

Women often need social protection support, as they lag behind men based on social development indicators and are discriminated against. Gender has not uniformly been used as an analytical tool to design social protection programmes. Analysis showed that programmes targeting women as beneficiaries may reinforce their traditional roles, as mothers and carers, not as individuals (Molyneux, 2008). Women’s empowerment or positive change of gender relations towards substantive equality may not be promoted. Holmes and Jones (2013) concluded that beneficiary women cannot always increase their control over household income, and conditions may only increase their domestic workload and time burden. They suggest that with relatively simple changes in design and with investment in implementation capacity, social protection can contribute to transforming gender relations at the individual, intra-household and community levels.

Although economic growth will continue to play an important role to help eradicate poverty, other supporting instruments will also be required. One such instrument is an effective and efficient social security system. The National Social Security Strategy (NSSS) proposes short, medium and long term solutions. In this regard, a National Consultation on key policy issues took place on 10 August 2017 at the Carnival Hall, Bangabandhu International Conference Centre (BICC), Dhaka. The objective of the National Consultation exercise was to share knowledge, experience and current challenges in relevant social protection areas and to strengthen the policy making capacity of Government and associated civil society organisations in social security.

The NSSS intends to develop a lifecycle focussed social security system. It aims to cover all children including girls under the childhood support and explicitly intends to extend Support for Vulnerable Women of Working Age. It also includes a proposal for a consolidated Vulnerable Women’s Benefit (VWB) programme.

There is a need for evidence from research to inform policy decisions, to monitor and evaluate the performance of reform work envisaged in the NSSS, and a need for social protection, to counter escalated vulnerabilities caused by climate change. So, two papers were presented and discussed: Gender Diagnostics and Policy of Social Protection Issues of National Social Security Strategy (NSSS).

The Policy Dialogue was attended by Senior Secretaries, Secretaries and other officials of the Government of Bangladesh, development partners, UN agencies, NGOs and representatives of civil society. The programmes were arranged by the Social Security Policy Support (SSPS) Programme which assists in the roll-out of the NSSS. The SSPS Programme is jointly implemented by the Cabinet Division and the General Economics Division, in partnership with DFID and UNDP. 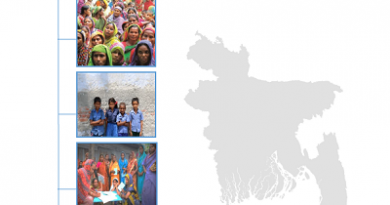