Bangladesh was one of the 36 countries with more than 20 per cent stunting rates on which the Lancet Nutrition Series focused its investigation of the effects of nutrition interventions (Bhutta et al 2008). In 2009, it was included in the WHO’s landscape analysis of nutrition governance, which judged it to be a country which had placed strong emphasis on nutrition in both its PRSP and UNDAF. The country reported strong Nutrition Governance indicators, and appeared to be on track toward reaching MDG1, according to WHO data (WHO 2009). Being ‘on track’ means that, using the ‘underweight’ measure, a country is showing a reduction of 2.6 pp per year in malnutrition according to UNICEF’s official tracking. However, as will be shown later, this judgement can be disputed in the case of Bangladesh.

Bangladesh presents a contradictory case study in terms of ‘nutrition governance’. Although it is judged strong by the WHO’s measures, which are multidimensional but based primarily on policy documents, closer study reveals that there are various problems involved in this governance, many of which form barriers to the clear communication of goals and targets, and to the effective interaction of government, donor and implementing bodies. This study aims to outline these problems, along with existing and potential solutions, and to offer broad conclusions as to which strategies appear to be strongest in creating good nutrition outcomes. The research was carried out during 2011 and involved both desk research, mainly of Bangladeshi government documents, and other grey literature. It also involved interviews conducted in Dhaka, during June 2011 (see table 1 in appendix), during which 25 people were interviewed from various organisations relating to the national nutrition strategy and its implementation. 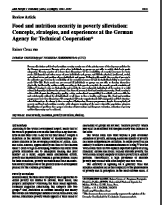 Food and nutrition security in poverty alleviation: Concepts, strategies, and experiences at the German Agency for Technical Cooperation Working Paper No. 21: Vulnerability to Shocks and Coping Strategies in Rural Bangladesh