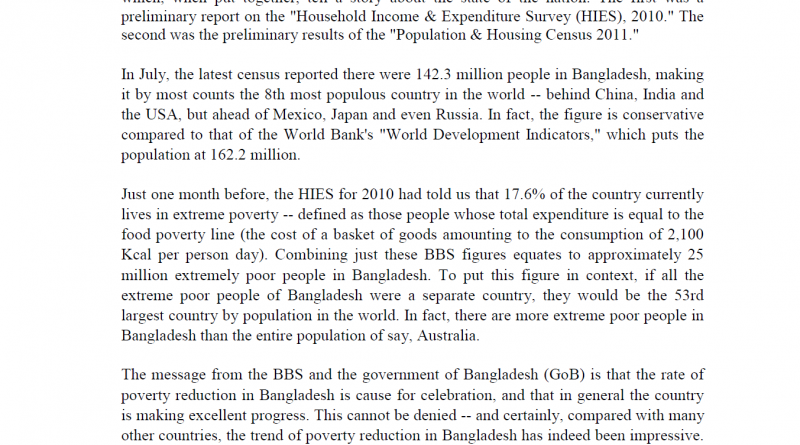 This year two major reports came out of the Bangladesh Bureau of Statistics (BBS) which, when put together, tell a story about the state of the nation. The first was a preliminary report on the "Household Income & Expenditure Survey (HIES), 2010." The second was the preliminary results of the "Population & Housing Census 2011."

In July, the latest census reported there were 142.3 million people in Bangladesh, making it by most counts the 8th most populous country in the world -- behind China, India and the USA, but ahead of Mexico, Japan and even Russia. In fact, the figure is conservative compared to that of the World Bank's "World Development Indicators," which puts the population at 162.2 million.

Just one month before, the HIES for 2010 had told us that 17.6% of the country currently lives in extreme poverty -- defined as those people whose total expenditure is equal to the food poverty line (the cost of a basket of goods amounting to the consumption of 2,100 Kcal per person day). Combining just these BBS figures equates to approximately 25 million extremely poor people in Bangladesh. To put this figure in context, if all the extreme poor people of Bangladesh were a separate country, they would be the 53rd largest country by population in the world. In fact, there are more extreme poor people in Bangladesh than the entire population of say, Australia.