With about 40 per cent of its population living below the poverty line and an increasing number of population being added below the lower poverty line, safety net programs in Bangladesh are more than a necessary element in fighting poverty. The government has been following a combination of direct and indirect safety net programs for poverty eradication addressing both human and income poverty. However, despite having a large number of programs under the safety net, the rate of poverty reduction has not been satisfactory. It is thus crucial to scrutinize the impact of the existing safety net programs on poverty reduction in Bangladesh and identify the kind of programs that would be more suitable to the socio-economic condition of the country. 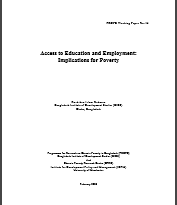 Macro Crises and Targeting Transfers to the Poor