The objective of this study is to validate the World Food Programme’s (WFP) method of establishing the prevalence of food insecurity. WFP’s method has two parts: (1) the construction of a Food Consumption Score (FCS) and (2) the classification of food security status based on the FCS. Our validation work has the following components: (1) collecting and analyzing survey data from three countries—Burundi, Haiti, and Sri Lanka—that contain information about calorie consumption at the household level and information needed to construct the FCS; (2) establishing the extent to which an assessment of food security status based on the FCS mimics food security status based on household calorie consumption; and (3) assessing whether changes to the construction of the FCS would improve its predictive power and whether such changes are feasible, given the environment in which these assessments are typically conducted.

To achieve the third objective, alternative dietary diversity and food frequency indicators are constructed by either modifying WFP’s calculation method for the FCS or following a different approach, such as that for the Household Dietary Diversity Score developed by the Food and Nutrition Technical Assistance Project. By comparing indicator performance, we can answer the questions of whether the FCS could be simplified by using food group diversity instead of food frequency by food group, if further disaggregation of food groups would improve its validity, and what the merits and demerits of other aspects of WFP’s standard method are. Based on our findings about the validity of the FCS and the results for alternative proxy indicators, we then suggest changes to the construction of the FCS.

Our findings on the usefulness of the FCS are encouraging. The same holds true for the alternative indicators of dietary diversity and food frequency we considered. There are positive and statistically significant associations with calorie consumption per capita, particularly when small quantities are excluded from food frequencies. In two out of three study sites, food frequency scores are clearly superior to simpler measures of diet diversity (food or food group count). Higher levels of disaggregation are advantageous, but with diminishing marginal returns. We note, however, that the provision of food aid seems to weaken the association of the FCS with calorie consumption.

All of these observations support the use of WFP’s FCS for food security assessments. However, the cutoff points used by WFP to define poor, borderline, and adequate Food Consumption Groups are too low when the FCS classification is compared to estimates of calorie deficiency from our survey data and other sources. As a food security classification device, the FCS could be improved by excluding foods consumed in small quantities from the FCS and, even more important, adjusting the cutoffs used to classify households as having poor, borderline, or acceptable food security. Minor gains in the validity of the FCS could be achieved by making several technical adjustments to the calculation of the FCS, for example, using a 12-group food classification instead of an 8-food group classification.

This study has several limitations. We did not validate the proxy indicators against diet quality, because this would have required the collection of individual 24-hour recall data for all household members, which was beyond the scope of our study. The use of seven-day household recall data is a limitation for our analysis; information on dietary intakes from individual 24-hour recalls is generally considered more accurate. The lack of precise information on the effects of excluding small quantities from food frequencies is another constraint. Right to food: no more a myth 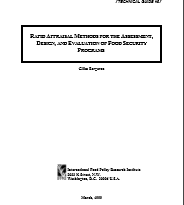 Rapid Appraisal Methods for the Assessment, Design, and Evaluation of Food Security Programs 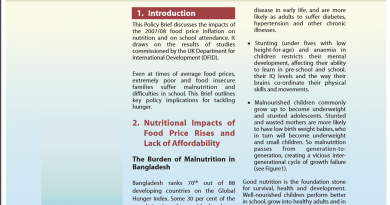