Niger is the epicentre of hunger. Here, it is chronic. Corrosive. Structural. Systemic. Over 65 per cent of people survive on less than $1.25 a day.1 Nearly one in two children is malnourished.2 One in six dies before they reach the age of five.

Families are fighting a losing battle against soil depletion,  desertification, water scarcity, and unpredictable  weather. They are exploited by a tiny elite of powerful traders who set food prices at predatory levels.

Shocks rain down upon them like hammer blows: a compounding series of disasters, each one leaving them more vulnerable to the next. The drought of 2005. The food price crisis of 2008. The drought of 2010. These events stole lives, shattered families, and obliterated livelihoods. The consequences will be felt for generations.

Chronic and persistent hunger. Rising demand on top of a collapsing resource base. Extreme vulnerability. Climate chaos. Spiralling food prices. Markets rigged against the many in favour of the few. It would be easy to dismiss Niger, but these problems are not unique – they are systemic. The global food system is broken. Niger is simply on the front line of an impending collapse.

At the start of 2011, there were 925 million hungry people worldwide.4 By the end of the year, extreme weather and rising food prices may have driven the total back to one billion, where it last peaked in 2008. Why, in a world that produces more than enough food to feed everybody, do so many – one in seven of us – go hungry?

Most are self-serving, designed to blame the victims or to defend the status quo and the special interests that profit from it. This is symptomatic of a deeper truth:  power above all determines who eats and who does not.

Hunger, along with obesity, obscene waste, and appalling environmental degradation, is a by-product of our broken food system. A system constructed by and on behalf of a tiny minority – its primary purpose to deliver profit for them. Bloated rich-country farm lobbies,  hooked on handouts that tip the terms of trade against farmers in the developing world and force rich-country consumers to pay more in tax and more for food. Selfserving elites who amass resources at the expense of impoverished rural populations. Powerful investors who play commodities markets like casinos, for whom food is just another financial asset – like stocks and shares or  mortgage-backed securities. Enormous agribusiness companies hidden from public view that function as global oligopolies, governing value chains, ruling markets, accountable to no one. The list goes on. Sustainable Agriculture and Food Security in Asia and The Pacific 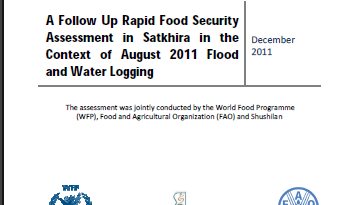