Food insecurity continues to be a major development problem across the globe, undermining people’s health, productivity, and often their very survival. Efforts to overcome the development challenges posed by food insecurity necessarily begin with accurate measurement of key indicators at the household level. This is due to the fact that identification of household behaviors relating to food access serves as a critical building block for the development of policies and programs for helping vulnerable populations, the effective targeting of assistance, and the evaluation of impact.

This manual is a guide for measuring food security using the food data collected as part of household expenditure surveys (HESs). While the main focus of these surveys has been on measuring households’ total monetary expenditures as a proxy for income, the surveys typically collect data on a variety of other aspects of people’s well-being as well, such as education, housing, and health. With respect specifically to food, data are collected on all foods acquired by households, including their food purchases, foods consumed from their own farms or gardens, and foods received in kind. Traditionally, data collection has been limited to the monetary value of these foods. However, as this manual demonstrates, accurate measurement of food security requires that data also be collected that allow estimation of the quantities of foods acquired by households. Estimated quantities, expressed in metric units, then serve as the basis for calculating a number of indicators of food security, including diet quantity, diet quality, and economic vulnerability to food insecurity. These indicators include

The primary objective of the manual is to inform HES data collectors and users how to collect the food data and use it to measure these indicators at the least possible additional cost. The manual has been written as a tool for a variety of development practitioners and researchers, including (1) technicians in governments and international development agencies comparing food security within and across countries so that assistance can be targeted most effectively and changes in food insecurity over time can be monitored, (2) project managers planning and implementing Monitoring and Evaluation systems, and (3) researchers investigating the causes of food insecurity and the impact of specific policies and programs. 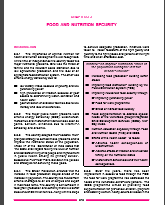 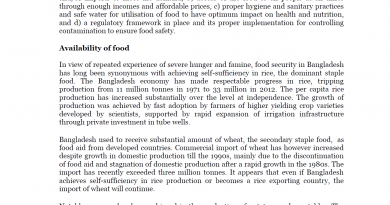