The purpose of the United States Agency for International Development (USAID) Food Security Country Framework (FSCF) for Bangladesh is to provide programming guidance to current and potential USAID/Bangladesh Mission food security partners on the development of Title II-funded multi-year assistance programs (MYAPs) for the period 2010-2014 in Bangladesh, and to improve program and resource integration.

Bangladesh has made many important gains in the last fifteen to twenty years in economic and social indicators, including reducing the prevalence of poverty and child malnutrition. Although still a poor country, with a per capita income of only $470 in 2007, Bangladesh has established a credible record of sustained growth within a stable macroeconomic framework. For a country at a relatively low level of development Bangladesh has also managed to achieve some major successes in improving several key social indicators and graduating into the medium human development group using the United Nations Development Programme (UNDP) rankings.

Despite these improvements, Bangladesh remains a food insecure country, with improvements needed in food access and utilization in particular. Fifty-six million people (40 percent of the population) were living in poverty in 2005 and 35 million in extreme poverty. The country is also particularly vulnerable to rapid onset natural disasters, including floods, cyclones and storm surges, which have major adverse affects on the economy as a whole as well as on people’s livelihoods, food security and health. Bangladesh was hit by three natural disasters in 2007 – two major floods and a devastating cyclone – within a few months of each other. The steep rise in food prices in 2007-08, including the main staple, rice, was another significant shock, which revealed the risk posed by global price volatility for a net food importing country like Bangladesh. The fact that 43 percent of the children less than five years of age suffered from chronic malnutrition (stunting) in 2007 is another concrete indicator of the magnitude and persistence of the food insecurity problem. It also highlights the serious implications of the current food insecurity situation for the country’s future economic, social and political development.

Chronic poverty and malnutrition remains primarily a rural problem. More of the poor and more of the chronically malnourished children live in rural areas. People living in rural areas are also more likely to be poor and to have malnourished children than those living in urban areas. The degree of food insecurity also varies geographically depending on the agro-ecology of specific areas, the levels of poverty and chronic malnutrition and the risks and vulnerability to shocks, particularly floods and cyclones. According to the poverty maps produced by the World Food Programme (WFP) as part of its food security mapping exercises, the rates of poverty and extreme poverty are highest in the districts in the northwest, the coastal belt and the districts of Mymensingh, Jamalpur and Jessore. (See poverty and extreme poverty maps on pages 26 and 27). Another WFP-produced map indicates that stunting is more prevalent in the northern part of the country and in the coastal areas in the south and southeast. 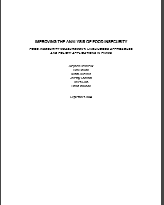 Stories from the field: The National Food Policy and Plan of Action