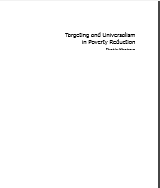 For much of its history, social policy has involved choices about whether the core principle behind social provisioning will be “universalism”, or selectivity through “targeting”. Under universalism, the entire population is the beneficiary of social benefits as a basic right, while under targeting, eligibility to social benefits involves some kind of means-testing to determine the “truly deserving”. Policy regimes are hardly ever purely universal or purely based on targeting, however; they tend to lie somewhere between the two extremes on a continuum, and are often hybrid, but where they lie on this continuum can be decisive in spelling out individuals’ life chances and in characterizing the social order.

This paper is divided into two parts. In the first part, Thandika Mkandawire discusses the forces behind the shift from universalism toward selectivity in using social policies to combat poverty in the developing countries. In the second part, a review of the lessons from such policies, he considers the administrative difficulties of targeting in the poor countries, the political economy bases of policy choices, and the consequences of policy choices for individual incentive. Mkandawire pays special attention to cost-effectiveness, because advocates of selectivity in the fight against poverty raise it as the main argument in its favour.