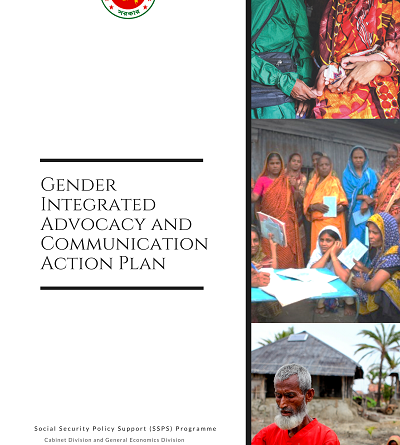 Bangladesh has achieved significant progress in reducing poverty in the country over the last four decades. The Government has adopted multidimensional policies, strategies and taken measures to address poverty to free the country from hunger and poverty. The Government’s Vision 2021 and its Perspective Plan 2010-2021 prioritized inclusive growth, poverty eradication and empowerment of women. One major step towards this end was the approval of the National Social Security Strategy (NSSS) 2015 and the government has taken many programmes and measures for social security (SS) according to the NSSS. The measures include actions for promoting inclusive growth, human development, finacial inclusion, job creation, resilience from climatic shocks, addressing gender inequality, and increasing coverage of SS for the poor. As a result, Bangladesh’s progress on Sustainable Devlopment Goal 1, Reducing extreme poverty is on track as measured by  $1.90 a day. Besides, the Government has adopted measures to ensure food security and to address hunger and nutrition. The efforts include nutritional programmes like distribution of fortified rice, salt iodization, Vitamin A supplement for children, iron-folic supplementation among pregnant, lactating women and adolescent girls, deworming, and campaign for breast-feeding. Social Security programmes (SSP) include education, social security (SS) care financing, support for water and sanitation as well as various social allowances for elderly, persons with disablity, vulnerable women, students and other groups. Besides, there are several climate adaptive social security and livelihood programmes.

For the last 10 years the expenditure on SSPs has increased almost  three-fold. In the Financial Year (FY) 2019-20, total expenditure for SSPs is 2.58 percent of GDP, which also includes pension of Government officials. Despite an increase in the budget for SS every year,  the allocation is still low compared to the estimate in  7th Five Year plan, inadequate in many areas and has covered only a small share of  deserving persons.

SSPs have considered women as a distinct group needing support and there are several women- specific programmes. There are other programmes, which also have specfied a share for women.  The NSSS adopted a lifecycle based approach and proposed several reforms and consolidaton of programmes. It considered specific SS needs and has proposed for a consolidated Vulnerable Women’s Benefit Programme.  The reality is that there are social, economic and organizational barriers for women’s access to SSPs.

To ensure full and inclusive implementation of NSSS, it is important to reach all deserving persons for all the groups. To address gender perspectives, this requires both information dissemination, public communication and advocacy. Transparency of information dissemination and awareness about the availability of social protection support for different groups at the local level is essential to ensure inclusion and equity. It has been identified that strategic and planned communication is necessary to ensure increased access of the beneficiaries. Therefore, a Gender Integrated Advocacy and Communications Strategy for the NSSS would be useful to take forward the actions outlined in the NSSS. Therefore, this effort of preparing a Gender Integrated Communication Diagnostics, Strategy and an Action Plan has been taken. 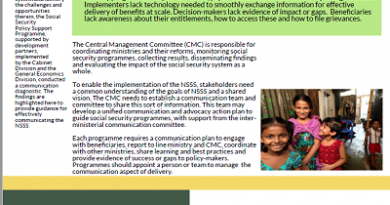