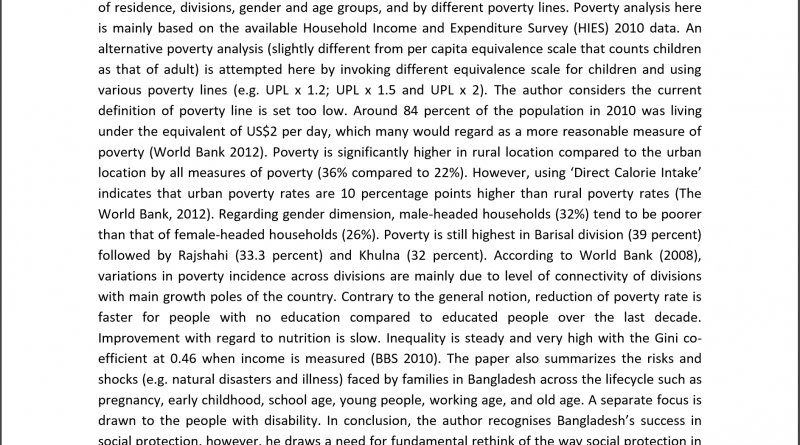 This paper aims to undertake an assessment of poverty profiles by different attributes such as areas of residence, divisions, gender and age groups, and by different poverty lines. Poverty analysis here is mainly based on the available Household Income and Expenditure Survey (HIES) 2010 data. An alternative poverty analysis (slightly different from per capita equivalence scale that counts children as that of adult) is attempted here by invoking different equivalence scale for children and using various poverty lines (e.g. UPL x 1.2; UPL x 1.5 and UPL x 2). The author considers the current definition of poverty line is set too low. Around 84 percent of the population in 2010 was living under the equivalent of US$2 per day, which many would regard as a more reasonable measure of poverty (World Bank 2012). Poverty is significantly higher in rural location compared to the urban location by all measures of poverty (36% compared to 22%). However, using ‘Direct Calorie Intake’ indicates that urban poverty rates are 10 percentage points higher than rural poverty rates (The World Bank, 2012). Regarding gender dimension, male-headed households (32%) tend to be poorer than that of female-headed households (26%). Poverty is still highest in Barisal division (39 percent) followed by Rajshahi (33.3 percent) and Khulna (32 percent). According to World Bank (2008), variations in poverty incidence across divisions are mainly due to level of connectivity of divisions with main growth poles of the country. Contrary to the general notion, reduction of poverty rate is faster for people with no education compared to educated people over the last decade. Improvement with regard to nutrition is slow. Inequality is steady and very high with the Gini co-efficient at 0.46 when income is measured (BBS 2010). The paper also summarizes the risks and shocks (e.g. natural disasters and illness) faced by families in Bangladesh across the lifecycle such as pregnancy, early childhood, school age, young people, working age, and old age. A separate focus is drawn to the people with disability. In conclusion, the author recognises Bangladesh’s success in social protection, however, he draws a need for fundamental rethink of the way social protection in Bangladesh is conceptualised and delivered. 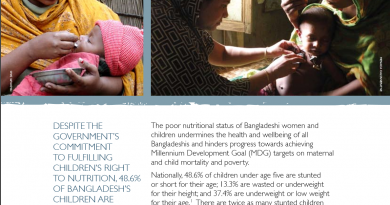